Took a trip over to GarageRippleDrift in sleepy Spalding, Lincs last night to get some tyres put on the Origin wheels. I caught Paul Smith and his Dad come-Chief Mechanic Roger putting some finishing touches to his Japspeed Maxxis Tyres S15.

The car started out life as a Spec-S non-turbo Automatic model but was treated to the SR20DET and manual swap by Mitch at Driftgarage during his brief ownership of the car. 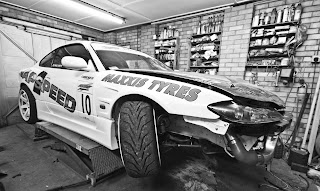 The transition from good base-model drift car to full on purpose-built track car, including paintwork has all taken place inside Paul and Roger's modest garage out the back of Roger's house. Note in the picture above the SERIOUS amount of steering lock, this has been achieved by using Japspeed steering arms and ends and some very trick GPSports knuckles which allow for adjustment of the steering pick-up points on the hubs. The front arches have been cut out and 'tubbed' to make the most of this generous extra lock. 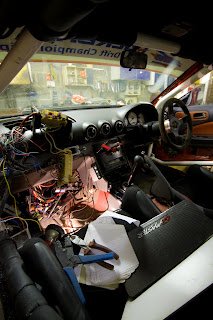 As I was visiting Roger was working on the finishing touches of the wiring loom which he assured me was 'just wiring the wipers up'. I'm not sure if he was joking or not, that amount of wires is enough to send me running! The interior is simple and purposeful, a pair of Corbeau seats and powder-coated white Fabricage occupy the main cabin space, meanwhile the stock S15 dash has been modified to accomodate ProSport gauges, which look almost factory! 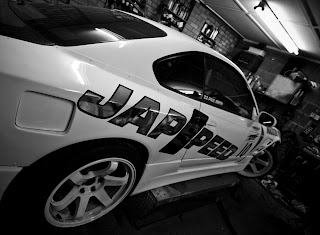 The car now sports clean white paintwork, a departure from last year's standard Nissan red. Japspeed have been supporting Paul for the last two seasons, I am looking forward to finally seeing the car drifting alongside Danny Ayles' and Shane Lynch's Japspeed S15s in Sunday's BDC Team Event at Norfolk Arena. Danny and Shane's cars are both running high-power RB25 engines from the R33 Skyline so I hope Paul can keep up! 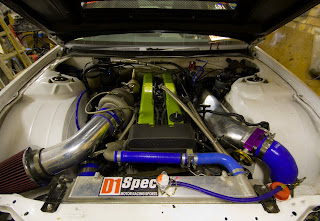 Something tells me he will be able to! The piece-de-resistance takes centre stage when you lift the EPRacing carbon bonnet. The engine is a 2500cc 1JZ lifted from a Toyota Soarer. The turbo is a GT3076R mounted to a Japspeed top-mount manifold and the combination produce 474bhp and 440lb/ft torque, more than enough to chase down the other Japspeed S15s. Sadly more than enough to twist the prop earlier on in the month at Prodrift Round 3 also! 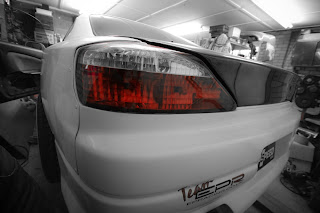 If you want to see the S15 in action be sure to pop over to Norfolk Arena at the weekend for Round 4 of the British Drift Championship - two days of full on action! Be there Saturday from 6pm for Round4 and Sunday from 10am for the Team Drift Competition!

Just spotted this on DW. Great video and great music. Check out www.fatlace.com and Mos Def's new Album - The Ecstatic.
Posted by Jord at 12:39 No comments:

Loving this at the moment.
Posted by Jord at 14:49 No comments: